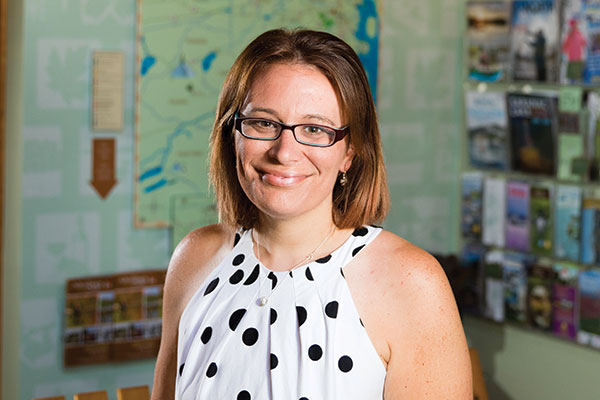 There was a time when front line staff at local hotels told visitors they would have to go elsewhere to find things to do, but all that has changed. Training programs, developed by the North Country Chamber of Commerce, equip line staff with the knowledge they need—knowledge about the Adirondack Coast and everything it has to offer for visitors and residents alike.

Now, according to Kristy Kennedy, the Chamber’s Vice President of Marketing and its Director of Tourism, staff at those same hotels compete with each other to best answer the popular question, “What is there to do here?” When they answer that question they focus on three main points — outdoor recreation, history and agri-tourism.

Between Plattsburgh’s rich history, the area’s vineyards and breweries, apple orchards and farms, Lake Champlain, and the Adirondack mountains, all three categories are well-represented.

Kennedy cited summer and fall as the busiest seasons in the area with beach volleyball and bass fishing tournaments, the Biggest Loser Run/Walk, motorcoach travel, and cycling. And in the winter there’s amazing mountain skiing and trails for cross-country skiing and snowshoeing — all activities that are marketed with the help of the Chamber through television campaigns, giveaways and tradeshows. “Montreal is our biggest market,” she asserted. “We’re up there regularly to speak to specific audiences.”

When asked about her approach to market- ing, Kennedy insisted teamwork is key. “You need the right people on your team,” she said. “I’m not an expert in each area, but I know when to pull in the right people.” Kennedy also acknowledged the ways in which marketing has changed in recent years. “Nowadays,” she said, “you have to talk about social media. You can’t not be there and you can’t not have a really, really strong strategy.”

The Adirondack Coast is embracing social media with a presence on Instagram, Twitter, Facebook, and more. Kennedy also stressed the importance of reaching out to travel bloggers. “We do one-on-one invites to bloggers,” she said. “We take them around and make sure they know what we have.”

And social media isn’t the only way the Adirondack Coast is embracing digital marketing. Geocaching, which is essentially a GPS-based scavenger hunt is catching on. “You might go to Rouses Point,” Kennedy explained, “and never know there’s a great coffee shop there, or great shopping or a great bed and breakfast.” Geocaching leads people to destinations in search of caches, and can be used to market lesser-known attractions in the area.

There are also exciting digital marketing developments on the horizon for 2017. The Chamber Marketing team has recently started filming a web series, featuring a personal tour guide taking you to local hidden gems. Kennedy believes one of the best things about the area is that “we have so many wonderful secrets.” The new web series will give visitors what she calls a “GoPro look” at the Adirondack Coast.

“Tourism and promotion,” Kennedy emphasized, “isn’t just for visitors. I love to see young community members and seasoned business owners joining together to revitalize the area. Grassroots efforts are really growing. Young people want to see change in the community. People come here and want to stay if they have a good quality of life.”

This growth is reflected in the influx of local businesses and events. With successful wineries, breweries, restaurants, musicians, and more combined with strong and creative marketing, the North Country is becoming a more vibrant and desirable destination for both tourists and residents.

“Out of the six counties in the Adirondacks,” Kennedy said, “we’re #3 for tourism spending. We’re doing well. There are so many worthwhile things happening here.”