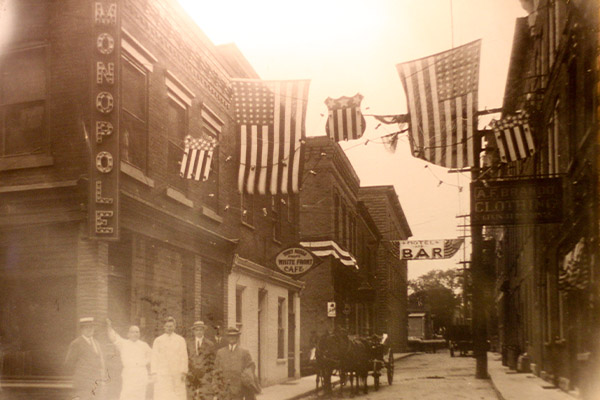 To the Plattsburgh native who has experienced the town’s changes – through downturns and boom times – and watched the evolution of the commercial landscape, it comes as little surprise that the Monopole is Plattsburgh’s longest tenured downtown business. Likewise, a newcomer — unaware of the town’s history — only needs to take a few steps inside the Protection Avenue establishment to understand that the place is historically significant.

Unlike other downtown businesses that have come and gone through the decades, the Monopole has endured not because it sells some material commodity. Rather, it thrives on providing a welcoming environment for all who enter. For a bar that is close to celebrating its 125th year in business, the age-old recipe is clearly working. The Monopole first opened its doors in 1898, the year of the Spanish-American War, when candy corn was invented and the first auto insurance policy was sold. In other words, the place is old, old. Rumors abound about the Monopole — everything from Theodore Roosevelt dining in during his 1904 presidential campaign; to Jack Dempsey, the legendary heavyweight boxer, frequenting the establishment in the 1920’s; to surviving Prohibition by operating as a clandestine speakeasy. The Monopole spent the first half of its existence as an upscale restaurant, known for its sizzling steaks, attention to detail and second-to-none table service. While the attention to detail remains, the fare has changed. Steak and seafood have been replaced by pizza and wings, but the essential character has been preserved. The Monopole remains an integral gathering place for those who frequent Plattsburgh’s downtown.

Corey Rosoff, the Monopole’s longstanding owner, prides himself on keeping the bar true to its roots. The front bar features the original stained glass and woodwork. The front door has been there since the opening. And yet, when I complimented him for preserving the bar’s key elements, Rosoff was quick to point out what has changed. He admitted the addition of television sets drew some grumbles when they were first installed and the removal of the bar snugs (small, private rooms) on the first floor brought the ire of businessmen who used their cloak of privacy to broker deals. Many of the other changes, like refinished wood surfaces or refabricated steel, are impossible to notice, a testament to his investment in preserving the quality craftsmanship.

Rosoff, who worked as a cook, bouncer, bartender, and manager before taking ownership, has used his wealth of knowledge to build a strong team. “One of the things I learned from the previous owner was you build a culture. You hire a diverse staff that aren’t clones of each other,” he said. The team’s diversity, along with the classic environs, provides a winning combination that sets patrons at ease by offering a sense that the bar is not catering to one particular group, a sense that all are welcome.

It is apparent that this detail is a point of pride for Rosoff, the feeling that anyone can come in, find a spot in one of the different rooms and effortlessly mesh into the bar’s atmosphere. In the last few years, he has delegated more responsibility to his capable staff, but one general rule remains. “Type A personalities fit in well here,” he joked. As in, if a new hire is willing to work hard, learn the ropes and make things happen with their own panache, the Monopole is the right gig for them. In Russell C. Duntley’s 1977 publication, The Monopole Legacy he wrote, “The Monopole…has persevered and continues to thrive…often in spite of the vicissitudes of changing time, people, economy, and values.” And so, it has. In the first chapters of its history that meant navigating wartime, Prohibition and changing social values. In the year’s since — the time frame that Rosoff has been involved in the business — this has meant dealing with the change in the drinking age, an Air Force Base closure and now a pandemic. But while other businesses have not been able to weather the changing sensibilities of American commerce, the Monopole has thrived.

On the final page of Duntley’s history is a quote from Rosoff’s predecessor, Brett Heiss, “When the people of Plattsburgh realize what downtown can be, Plattsburgh will eventually become a strong, viable city and we will be a nucleus, here at the Monopole, because, as Protection Alley was the crux and center of the entertainment area of this city, so it can be again. That is why our motto, here at the Monopole, is, ‘We’ll always be here.’” Whether the year is 1898, 1977 or 2022, there is solace to be found in that message. Some ease in knowing that on even the coldest night, the warmth of the Monopole spills out onto Protection Avenue inviting the passerby in. That feeling, of being welcomed, 124 years later, remains in vogue. For those of us who continue to be invested in Plattsburgh’s downtown revitalization, that is a legacy worth toasting to.