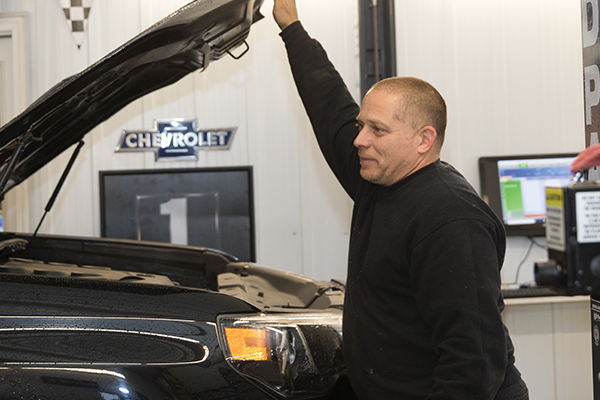 When the property at 557 Route 3 in Plattsburgh fell into foreclosure local businessmen Ray Beebe and Robin Weeden saw an opportunity. The two men purchased the property which had one long standing tenant — A One Oil. Their intention was to continue business as usual. They would be the landlord and Fred Tuller, operator of A One, would stay on. But after talking with Tuller and presenting him with a new lease, they were surprised. He didn’t want to continue as things were, and who could blame him. Despite the rental income A One Oil had faithfully provided the previous owner, Tuller didn’t enjoy basic amenities. There wasn’t even running water in the main building.

When Tuller spoke up it prompted the men to sit down and figure out the best way to move forward. The new owners brought with them some capitol to invest in the structure and Tuller brought a client base he had served for over a decade. It was then that the idea of opening a Mobil 1 Lube Express franchise seemed to make the most sense.

READY FOR TAKE OFF

And so, with an idea of what the future would look like, the three decided in the fall of last year to close the business for six weeks. They hired friend and local carpenter, Steve Wolter, who together with Tuller remodeled the building, put in a customer waiting room, a restroom, and rehabbed the service counter. They replaced the lifts in the service bay and reopened their doors in November.

Weeden, who owns the Tastee Freeze in Beekmantown observed, “When people come to the ice cream stand, they usually leave in a good mood. I like that! I want that same feeling when a customer comes to get their oil changed!” Beebe, who has owned It’s All Good Restaurant and the restaurant at the North Country Golf Club added, “You can get an oil change anywhere. It’s the service that builds loyalty and customers.”

Mobil 1 Lube Express is proud to offer customers a number of service options but no high pressure sales pitches. In addition to a focus on service A One supports a number of community organizations. “We can’t say yes to everyone, but we really try to,” Weeden said. “It’s important to all of us to help,” added Beebe.

As Beebe and Weeden move into their second year of operation in the area of Route 3 near Uno’s restaurant, Hampton Inn and Fairfield Inn, they are checking the boxes on the goals they’ve accomplished and looking forward to the growth that can be possible when you offer your repeat customers quality service.