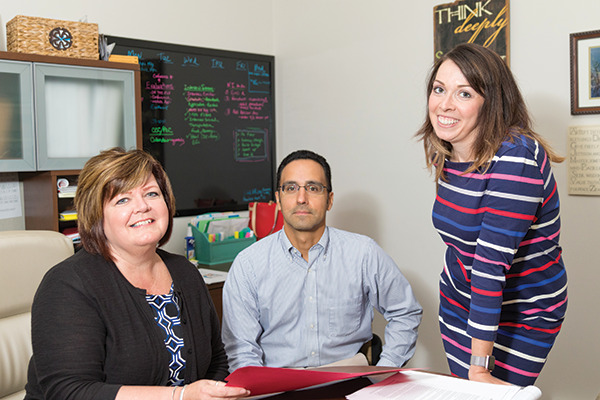 This past July, University of Vermont Health Network, Champlain Valley Physicians Hospital welcomed four new doctors. Dr. Stephen Winfield, Dr. Aaron Esterson, Dr. Ashley Bernotas and Dr. Therese Ray are the first class of Family Medicine Residents at CVPH. It’s a new frontier for the residents as they create the foundation for this brand new program and make Plattsburgh home for at least the next three years. Here they will begin to practice independently for the first time in their careers, making rounds at the hospital under the supervision of an attending physician as well as seeing patients at the Family Medicine Center on Margaret Street, all the while integrating into the local community.

A recent study shows that this region will experience a shortage of 100 physicians by the year 2018, and yet other studies show that where doctors complete their residency has a significant impact on where they ultimately practice (68 percent of doctors who complete all their training in one state end up practicing there, according to the Association of American Medical Colleges).

This group of young, enthusiastic new doctors, selected from more than 1,500 initial applicants, brings a strong interest in family medicine and in primary care for a rural community. They also bring a lot of promise that one or more of them will help curb the shortage of primary-care physicians in the North Country by remaining here after their three-year residency is complete.

With four more new doctors entering the program on an annual basis, the Family Medicine Residency program will import 12 new doctors to the region by 2019, training in three‐year rotations in emergency medicine, obstetrics and gynecology, pediatrics, cardiology, orthopedics and behavioral health. “We do hope that some of those residents that we match with will fall in love with the place and end up practicing here,” said Kathleen Freeman, residency program administrator. Freeman was hired in January 2015, to start the process of building the program from the ground up.

Getting the program up and running has been a long, steady process that first began in 2013. Ashley Doelger has been on board since the very beginning, “sort of by accident,” she recalled. “I was brought in to the first graduate medical education committee meeting, which is where the concept first came to paper.” While Doelger worked in Medical Staff Administration, she assisted Dr. John King with writing the application for the Accreditation Council for Graduate Medical Education (ACGME). The ACGME requires that residency programs have a coordinator and Doelger fit the job description.

Together, Freeman and Doelger, along with residency pro- gram director Dr. Tony Lopez and the faculty, have worked to prep the hospital’s existing programs to support a robust curriculum for their residency program and build the rotations schedules. The process included working with and making sure current faculty from various departments were excited to teach the incoming residents. They also had to prepare for the first application/interview season, go through the first “Match” and finally prepare for the onboarding and orientation of the first class. Freeman explained, “The entire residency team is filled with ongoing enthusiasm and feels privileged to be on the ground floor of this process. We are all excited to continue to watch the program grow from that first application pro- cess to a successful program that will train residents to practice family medicine anywhere, and also help serve the needs of our region.”

Dr. Lopez, a UVM graduate who had been practicing medicine in New York City for the last 15 years, is glad to be back in the Champlain Valley. “In the back of my mind I always wanted to come back up here,” he said. “While I was in New York I was following what was going on in Vermont and northern New York with the residency program, so the opportunity to be involved in its initiation and development was very exciting and a great opportunity.”

Lopez leads the program and reports to Dr. Kent Hall, the program’s designated institutional official and chief medical officer at CVPH. The rest of the teaching faculty consists of doctors on the medical staff who interact with the residents. Some are involved with patient care education while some give lectures and provide professional development guidance. Lopez said the size of the program provides a unique experience for residents than if they were at a major academic center.

CVPH president and CEO Stephens Mundy said he has treasured being part of an initiative that leaves positive ripples throughout the hospital and will eventually affect the entire healthcare system in the North Country. A physician recently stopped Mundy at a public event to tell him that working with the residents has rejuvenated his career. “He told me he had not been completely thrilled with what was going on for the past couple years and that working with the residents, teaching them and feeling their enthusiasm, had just been infectious. He is overjoyed at what’s going on.”

Mundy made a comparison between the new, vibrant residency program and the former cardiac surgery program, which served a very small number of patients and ultimately lost money. The hospital is now redirecting those resources (and continuing to get those patients wonderful care) toward the Family Medicine Residency. Additional monies that fund the program include a $1 million endowment from the Miner Institute, paid over multiple years. It’s an investment in the community that Mundy said will touch thousands of people every year, provide an excellent training opportunity for residents and improve the lives of the physicians who are teaching them.

“Our industry is going through so much change,” noted Mundy. “Whether you do well with change or you struggle with it, none of it is easy, but the residency program will propel this change in our healthcare system forward.”

Mundy said the biggest change to the healthcare system currently is how providers are reimbursed for services. The traditional fee for service, he said, is the basic, “If you do an x-ray, you get paid for an x-ray; if you have an ER visit, you’re paid for an ER visit. Now we’re moving towards bundle payments and global payments for providing health services for people.” It’s a sea change across the board, with insurance companies pushing back and patient advocates pushing forward. “I don’t care how good you are at it. Change is hard,” he said.

Reflecting on the $1 million endowment from Miner Institute, and knowing William Miner’s passion for education and healthcare, Mundy referenced a past Strictly Business article featuring Miner Institute president Rick Grant. “I was talking to Rick the other day, he actually quoted being interviewed by Strictly Business. The stock question, ‘Who would you have dinner with and what question would you ask?’ Rick said William Miner, and he would ask, ‘Are we getting it right?’ We talked about that a lot. If you look at what’s going on today, I think clearly Mr. Miner would think we’re on the right track.”

Touching once again on the theme of change, Mundy said, “Anytime you interject change some people react well and some don’t. I think what we have to be very much on guard for is not to disaffect one population to favor another as we go through wholesale change like we’re seeing here.”