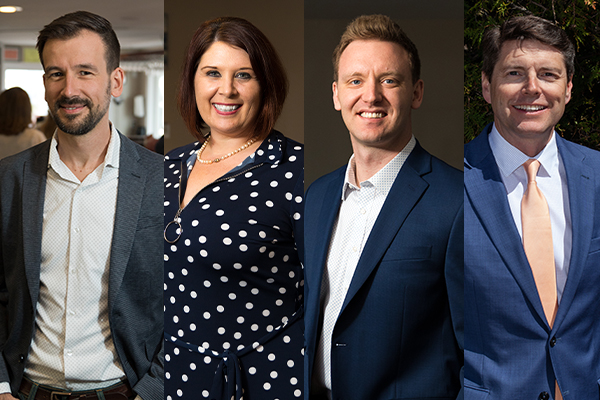 Matej Kollar, Molly Ryan, Ryan Lee, and Billy Jones were all featured eight/nine years ago in Strictly Business “Ones to Watch” issues. Since that time each has moved ahead in their professional career and established themselves in the North Country.

When we reconnected, SB found all are balancing rewarding careers with the needs of growing families. Despite this, or perhaps because of it, all are integrally involved in community organizations, the education system and their own personal growth.

Matej Kollar, a native of Slovakia, first came to the North Country as part of a student exchange program at Beekmantown Central School. Growing up in a bustling town one hour from Budapest, a teenage Kollar immediately embraced his new environment. “Since I grew up near a big city, I thought the lakes and mountains of the North Country were pretty awesome,” he reflected. “Back home after high school graduation, I realized SUNY Plattsburgh had a great international program, and that its School of Business was where I wanted to study. Four years later, I completed a double major in Accounting and Business, then earned my CPA.”

Always drawn to how businesses work and the hard decisions involved in distributing limited resources, a college internship at Swarovski Lighting later turned into a full-time position as a financial analyst. Eventually becoming the Head of Finance, Kollar helped negotiate the recent sale of the business to WAC Lighting.

With experience came increased levels of responsibility. Matt is now the Associate Vice President of Finance at Champlain Valley Physician’s Hospital (CVPH) in Plattsburgh and Alice Hyde Medical Center (AHMC) in Malone. He leads a sizeable team of talented professionals and is responsible for a multi-million-dollar budget. Kollar puts in long hours at a demanding job that he loves.

“I am grateful for what my colleagues do every day for the people of the North Country,” he said. “We’re all here to do the right thing in a very difficult environment. We try to do the best job with the resources we have.”

Expanding his work into the community, for the past six years, Kollar has been the self-described “money guy” on the Board of Behavioral Health Services North (BHSN).

As for his personal time, Kollar and his wife, a third-grade teacher at Cumberland Head Elementary School, and two children enjoy water sports in the summer and skiing in the winter. When he has solo free time, Kollar likes to cook and kite board.

“It is an immense privilege to be able to create programs to spur economic development in Clinton County,” said Ryan. “There are amazing people here, and we have a lot to offer.”

Born and raised in Champlain, NY, and a graduate of St. Lawrence University, Ryan began her career as Community Outreach Manager at Champlain Valley Physician’s Hospital (CVPH). She then worked with Congressman Bill Owens, and beginning in 2014, was Chief of Staff for Assemblyman D. Billy Jones. After five years traveling the state focusing on rural health, infrastructure and local government, Ryan began in her present position as Executive Director of the Clinton County IDA in January 2022.

When asked about her approach to developing business, Ryan answered: “I like to look at economic development holistically: affordable housing, workforce development and training, child care, reliable broadband, transportation, and creating a pipeline of opportunities for various types of business. We have so much going on.”

An important recent project is C-BIG, an acronym for the Clinton County Business Innovation Gateway. This is the development of the 600-acre former Clinton County Airport property on Route 3 in the Town of Plattsburgh into a mixed use (housing and industrial) park. With $3 million recently invested, plans are underway to extend the road and attract employers. The Champlain-Hudson Power Express, a hydroelectric project, is another significant initiative for the IDA.

Broadening her community work, Ryan was recently appointed to the board of the YMCA. Along with her husband, Eric, children and extended family, she is in charge of the Memorial Day parade for St. Mary’s Church in Champlain.

When first interviewed by SB in 2013, Ryan Lee was the District Executive for the Twin Rivers Council division of the Boy Scouts of America. While he loved the position, after five years he had advanced as far as possible without leaving the North Country and relocating to Texas. After a stint helping ETS Staffing expand its recruitment business to Burlington, Vermont, Lee accepted a position with Hickok & Boardman in 2018.

“Being an insurance broker is the last thing I ever thought I would do, but I love the ability to solve problems,” he explained. “There is always something to learn. When you’re working with various companies, no two situations are the same. It is interesting to learn what my clients do and how they do it. I must earn the trust of the decision maker, and then make recommendations as to the most comprehensive insurance coverage for them. We place a lot of emphasis on proactive risk management practices. It’s a lot of work, and a lot of fun.” When needed, I am also involved in safety recommendations and training.”

Lee has been an active Rotarian since 2012 and is scheduled to take on the role of Club President in July 2023. He has worked with the Adirondack Young Professionals and is currently a board member of The Strand Center for the Arts and U-First Credit Union. He is also the proprietor of Rondack Chairs and Furniture which makes folding Adirondack chairs and other wood furniture to order. “I wouldn’t be able to volunteer like I do without the support from my wife,” Lee offered. “We make a great team.”

Golf is another one of Lee’s passions. By combining his love of the sport with fundraising, he and other business colleagues host the annual “For the Kids Charity Golf Classic” held in September. “My friends and I nerd out on golf, and we raise a ton of money ($15,000 last year) to donate to organizations that help local kids.”

A native of Chateauguay, Billy Jones has worked tirelessly for the people of the North Country as an
elected official for over a decade. Beginning as Chair of the Franklin County Board of Legislators, Jones is now a New York State Assemblyman. With his election, Jones became the first Democrat to represent the North Country in the State Assembly in over 50 years. Since SB last featured him eight years ago, Jones also became a dad to daughter, Ella.

“Being a parent has enhanced and broadened my perspective on everything, but especially with regard to governing,” Jones disclosed. “I understand better now the challenges of parents in the workforce. I can relate to the struggle to find quality child care, and the balancing act between work and home.”

Jones district has a significant and increasing population designated as ALICE (asset limited, income constrained, employed). These are families who work, but are unable to meet their basic needs for food, child care, housing, health care, and transportation. Jones must make decisions that affect these people and all residents in his district with children. “Good paying jobs and health insurance are needed to support these families,” he emphasized.

“Because of my daughter, I have a personal connection on education, and what these kids are going through,” said Jones. “I also worked in farming and corrections before I ran for office. I am used to hard work and swing shifts.”

When asked about how the business community has fared over the last eight years, Jones cited the adage: A rising tide lifts all boats. “We are doing very well, even with the two-year COVID struggles. The North Country community is very supportive of one another. When one business does well, the other businesses do well.”

Speaking of COVID, Jones confirmed our strong dependency and great appreciation for Canadian business in the area.

One recent accomplishment that Jones is most proud of is the passage of the EMS bill that will help volunteer fire departments that provide ambulance services to recover costs.

How has he evolved over the years as an elected official? “I’ve become a better listener,” Jones said. “I try to set myself apart. I am not the loudest voice in the room saying outrageous things. Keeping things on an even keel is important to me.”