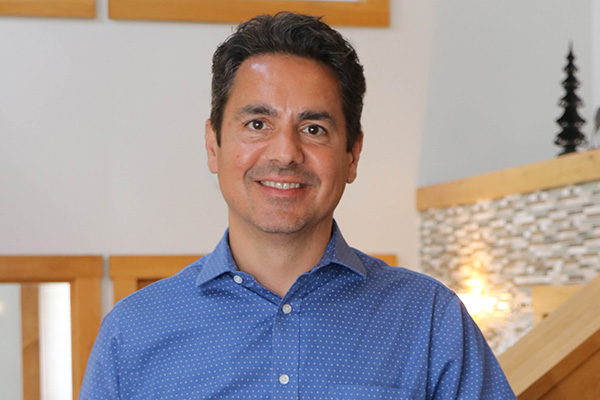 ONE OF THE MOST IMPORTANT decisions a student makes during medical school is which specialty to choose. When Dino Santoro began his medical training, he had an open mind. He considered general practice, dermatology and pediatrics but colleagues and his professors urged him to consider psychiatry. “They thought I had the right personality,” he explained.

“As I learned about the specialty, and experienced it first-hand during my rotations, I came to agree with their assessment. It would allow me to use my skills and give me the lifestyle I wanted for my family.”

Santoro grew up in Toronto but traveled west to the University of Manitoba in Winnipeg for his undergraduate education. He earned a degree in Anthropology in 1996 and completed two years of further study in Native American Studies. By then he knew he wanted a career in medicine and applied to the university’s Max Rady College of Medicine, graduating in 2002. Then came his five-year residency at the University of Toronto that is required for a psychiatry specialty. Once his formal training was complete, the newly accredited Dr. Santoro worked with underserved populations in small towns and throughout rural Ontario, all the while maintaining a private practice.

He then spent more than four years as an Assistant Clinical Professor at the Michal G. DeGroote School of Medicine at McMaster University in Hamilton, Ontario, one of only four Canadian universities listed in the top 100 in the world.

By 2014 Santoro was ready for a change. It was then he put out feelers to recruiters for a position in the U.S. that would keep him c Dr. Dino Santoro lose to Canada. He received two responses. One was from a hospital in Sault St. Marie. Michigan. The second was from CVPH Medical Center. “I was drawn to the hospital here in Plattsburgh,” Santoro said. “My wife is from Montreal and we have family there.” Later that year he became the Medical Director of Psychiatry at CVPH, a practicing psychiatrist and a Clinical Assistant Professor at the University of Vermont.

Fast forward a few years and Santoro was again ready for a new challenge. It was time to go out on his own. He found office space in the Glenwood Plaza on Route 22, just outside the village of Peru, and set about remodeling, rewiring, cleaning, and painting. He was quickly joined by two former colleagues who wanted to be a part of his new venture.

North Country Behavioral Medicine (NCBM), with Dr. Santoro as its medical director, opened its doors in 2017. Growth since that time has been amazing. The practice outgrew the Glenwood location in less than three years and a search was begun for its next home. An available property at 8 Broad Street, near the corner of Durkee Street in downtown Plattsburgh, proved to be an ideal location. NCBH quadrupled its footprint when it moved to its new home on March 1, 2020—just as people were beginning to understand the scope of the pandemic.

While the restrictions of COVID isolation were devastating for many businesses, NCBM saw a jump in patient demand and Santoro has been on a mission to hire more staff ever since. “I recruit by approaching people I know and respect as well as relying on my assessment of how that person will fit into our team of family professionals,” he offered. Currently the team is made up of two psychiatrists, three physician assistants, one nurse practitioner, eight (soon to be nine) therapists, one nurse, and an office staff of five. Psychiatric providers assess psychiatric conditions, provide medication management and offer therapy and counseling for those struggling with a wide range of conditions. Therapists provide psychotherapy and counseling to patients in a range of ages from children to seniors.

I asked Dr. Santoro to contrast the help offered to those with mental health issue today as compared to those in the past. “There used to be an emphasis on treatments like shock therapy, hypnosis, psychoanalysis, and at one point Prozac for almost everyone,” he explained. “Then the field moved to more specialized forms of talk therapy, targeted medication treatments and new modalities such as TMS and others to improve the quality of life for patients. (See the sidebar on this page for more information about TMS.)

Santoro has never liked the idea of advertising. “We will grow if the need is there,” he emphasized. “The community will tell us what they need and we will work towards meeting those needs.”

As our interview wound down Dr. Santoro spoke about his mission to eliminate the stigma often associated with mental health issues. “This is a clinic where we treat people with illnesses. It is no different than a place that would treat diabetes or cancer. I don’t want anyone who needs our services to feel like they have to hide. We have a large sign outside our building. We want people to know we are here to help.”

North Country Behavioral Medicine has seen dramatic growth and now, with a second office offering TMS in St. Albans Vermont, the practice is on track to meet the needs of a long-underserved population in the North Country.

TELL ME ABOUT TMS
Transcranial Magnetic Stimulation (TMS) is a non-invasive brain stimulation therapy that uses electromagnetic pulses to stimulate nerve cells, which may improve symptoms of neurological or mental health disorders. The technique is recognized by the American Psychiatric Association, the FDA and many international societies as a safe and effective treatment choice when multiple antidepressants have not provided full relief. TMS has a success rate of between 70% or 80%, meaning that the vast majority of individuals find significant relief after treatment. About 50% of people experience complete remission, meaning that the symptoms of depression are absent for up to a year. Over 1 million people have received more than 25 million TMS treatments. Dr. Dino Santoro and Dr. Archil Chechelashvili of North Country Behavioral Medicine have been trained to assess for and provide TMS treatments by Harvard Medical School, Duke University, the University of Toronto, and MagVenture TMS Research.