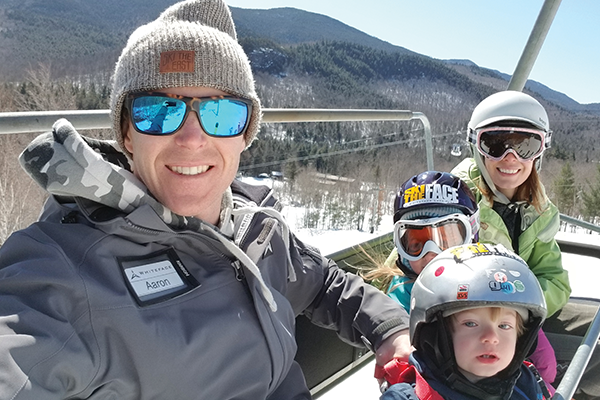 Aaron Kellett, general manager at Whiteface Mountain, grew up skiing the mountain. His father began working there in the 1980s on ski patrol and Aaron has worked almost every job there since his teens. He, better than anyone, knew that the writing was on the wall for the area’s cramped, outdated facilities. Over the recent Presidents’ Day Weekend alone, the area had some 6,400 skiers. “Our highs keep getting higher,” said Kellett.

The last major renovation to the main lodge was done in 1978—before the 1980 Olympics. The upstairs Cloudspin Bar was dark and dinky and then there were the stairs… “We had a lot of small, narrow stairways to get up and down to the different levels. You couldn’t really have people walking up and down at the same time,” he said. There was a real problem with the bathrooms, too. “We added restrooms on the second level. Before, guests had to go all the way down to the bottom level,” he said. And of Bear Den—the children’s learning area—Kellett said, “We were putting a lot of people into a very small space.”

In January 2017, Governor Andrew Cuomo announced a $20 million investment for major upgrades at Whiteface and Gore Mountains to attract more visitors and create state-of-the-art skiing and dining experiences, plus year-round activities. Most important was making the facilities competitive with resorts around the world, especially the renovated and modernized ski areas in nearby Vermont. As Cuomo put it, “New York has Olympic-caliber assets and world-class skiing, but the facilities at Gore and Whiteface are outdated and sub-par.”

While the state’s new investment in these critical North Country economic engines was long needed, it created a very tight timeline. According to Kellett, “We were told, ‘Okay, we’re going to award you this much in capital money, and this is what we would like to see you accomplish with it.’” The engineering phase with the Plattsburgh firm Architectural and Engineering Design Associates (AEDA) didn’t start until March 2017 and by the time all the components were figured out, the project wasn’t released for bid until mid-summer. According to state law, there must be multiple primes for the various elements of construction such as HVAC, electrical, and plumbing. Looking back, Kellett pointed out, “That made it more complicated. In a perfect world you have one contractor that manages all these different subcontractors.”

“Also, over 100,000 people visit us in the summer and over 200,000 visit us in the winter,” Kellett added, “so trying to work around the impact of the public was a major part of the project.” By late summer, it was all hands on deck for everyone involved in the construction project. Crews worked around lines for the gondola and adventure park, mountain bikers, and hiking and 4-wheel-drive tours.

The challenges of the fast-paced renovations have been well worth it. Compared to past years, the changes to Whiteface Mountain are fantastic. Just the view of the lodge from the gondola makes one want to go inside, get warm, and eat a good lunch. Upstairs, the roof of the Cloudspin Bar and Grill has been raised, letting the light spill in. There is more seating with handsome Old Hickory furniture. Outside the white stucco has been replaced with warm wood.

Downstairs, the enlarged cafeteria offers a variety of food options and also more light. Behind the scenes is an expanded and more efficient kitchen, a switch from oil to propane, insulation that has reduced the heating bill and numerous other efficiencies. Just putting insulation in the roof reduced the facility’s heating bill from $100,000 to under $50,000. But behind the scenes and away from the public, a lot of finishing work is still taking place.

While the main guest area has seen huge improvements, the really big change at the mountain is the creation of a new learning center at the old Bear Den children’s area. There is a new 15,000-square-foot lodge that will house beginner ski and snowboard lessons for both children and adults, plus a new restaurant, pub, and cafeteria with a series of large, beautiful windows looking up the mountain. The parking areas have been expanded and a new higher capacity lift is in the works. Aaron Kellett said the old children’s area was drastically lacking.

“We had two different learning areas for adults and kids. So the family comes to Whiteface, and there are a lot of cars here. They wait in line to get into a parking lot, then the family unloads their car, gets on a shuttle, and we bring them over to Bear Den Lodge where their kids are taking lessons. They wait in line to get the tickets and lesson coupons, and they drop the kids off. Now the kids are in their group lesson, but

Mom and Dad have a lesson too, and they are on the other side. So, they have to get back out of the lodge, hop on the shuttle, get down to the base lodge, then figure out their whole lesson plan. It was logistically challenging for a family to do that.

“When the goal is to make it as easy as possible for a family to ski, and keep them coming back year after year, Whiteface’s layout had long been a big challenge. At the new BearDen area, the trails are wider and flatter, there is no cross traffic with expert skiers, and the meeting space for lessons is right out the door. “

MLB Construction from Albany won the contract for the Bear Den Lodge, but encountered numerous hiccups from the beginning. For example, Heather Brunell, one of MLB’s project managers, explained that the original design called for large timbers that would take four months to deliver. Obviously, that didn’t fit into the tight project schedule, so they had the façade redesigned and, in the end, saved money, but lost time in the actual construction. The new lodge is half open this season and the second half—which will feature a bar, cafeteria, and efficient kitchen—will be open for the 2018–19 season.

The total cost for the new Bear Den Lodge is about $5 million, the improvements to the old base lodge are a bit over $3 million, and in this phase, about $500,000 was spent on the mountain itself. Besides finishing the lodges, the plans this summer call for upgrades to the grooming fleet and a major renovation of the mountain’s snowmaking system. The goal is to make more snow faster for less money. Snowmaking is Whiteface’s biggest power draw, and modern snow guns are 10 times more efficient than traditional snow guns. Also, the freeze and thaw cycle of the past few years has created numerous challenges for making snow from Ausable River water, with the slush and anchor ice clogging the snowmaking intake. Whiteface is banking on doubling the size of its pump house to solve the problem.

For us old-time skiers, this is all a bit mindboggling. Wherever one turns at the mountain, there is some kind of improvement or a plan in the works. Hopefully, the investment New York State has made will be returned in thousands of skier and snowboarder visits. For this everyday skier, the prospect of better snow, two beautiful lodges, better food, and maybe even better parking means I just can’t wait until next winter.