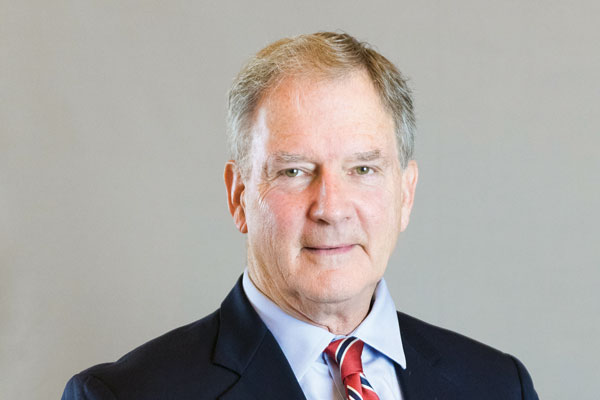 Community Involvement: Service to numerous local and regional organizations, among those are the Clinton County ARC Board and serving as a member of the SUNY Plattsburgh School of Business & Economics Advisory Council were cited as the most meaningful.

Former congressman and longtime Plattsburgh lawyer, advisor and advocate Bill Owens first came to Plattsburgh in 1977 to serve at the former Plattsburgh Air Force Base. While in the service, he worked nights and weekends with the Fitzpatrick Trombley law firm and continued with it after he left active duty in the late 1970s. In 1989, two major local law firms merged into what is now known as Stafford, Owens, Piller, Murnane, Kelleher & Trombley, PLLC. Owens served as managing partner of that firm from 1989 until he left for Washington, D.C., in 2009 following his successful campaign for a seat in the U.S. Congress. From 2009 to 2015 Owens served as the representative of the 21st district. His background in business and economic development, combined with unparalleled expertise in U.S.-Canada trade law prepared him well for his work in Washington, where he was able to successfully introduce and pass five pieces of legislation that were enacted into law and were favorable to his constituents in the North Country.

Owens’ election to Congress (the first Democrat in 150 years) was a huge win for local business, but so was his homecoming. Armed with new and robust connections in the federal arena, Owens returned to his firm in 2015 to resume practice locally focusing on business and cross-border trade, as well as estate and succession planning.

As a former contributing writer for Strictly Business, we are delighted to put Bill in the spotlight to share some of his many insights with our readers.

SB: What is it really like in Congress?
BO: The life you lead in D.C. is one that is very insular. Members of Congress exist in a microcosm, and there is a culture that is associ- ated with that. Most of the people with whom you meet bring an issue or idea. If you listen, you learn that for many, these really are legiti- mate concerns. After that, it is a matter of balancing those concerns versus the people who might have the opposite view. And then you have to convince your constituents that you went through a rational process to arrive at your decision. If you can’t, they may tune you out. It is a very interesting and dynamic process that goes on there.

SB: How has your time in Washington affected you person- ally and professionally?
BO: The experience of going through the process of getting elected and serving for five and a half years in Congress was very broadening in terms of my exposure to other people and other issues. To some degree it forced me to step outside myself and outside of Plattsburgh both physically and mentally.

Of the things that happened to me as a result of going into public life, probably the most important was that you saw many more issues and were exposed to their complexity. That was one of the more important growth experiences of my life.

Professionally, having been a member of Congress I can now speak to a broader spectrum of issues. This is helpful when you have visitors who come down from Canada and are interested in locating in the community. It is not uncommon for people to ask me about issues that aren’t legal in nature but are much broader, such as our current election cycle. I know a lot of the people who are still in office, which gives me a unique insight.

SB: Now that you have been back for some time, what do you see as the major challenges we still have to face locally?
BO: Essentially, we have to continue to develop upon the foundations that we have built over the last 30 years. The economic development work that is being done by the Chamber and its allies is very important, as is the work that many local towns are doing to prepare to entice and assist those who want to start a business here.

Some examples of preparation of the workforce are the Plattsburgh Aeronautical Institute, the Advanced Manufacturing Institute, and the continuing economic development work being done in both the private and public sectors.

SB: What are some areas that still need attention?
BO: The areas that were of concern when I left seven years ago have been largely addressed. Events like Downtown Rising and the Strand Theater create a great atmosphere in the community. We have taken some significant strides and we need to continue building on that very solid base.

SB: Who was your most influential mentor?
BO: A man by the name of Bill Casey, who owned F.W. Meyers & Co. in Rouses Point. Myers was a customs broker and freight for- warder and I was the lawyer for his business beginning in the early 1980s. The primary business focus was on U.S.-Canada trade, long before people in this area had any idea that Canada would be a key source of growth for the region. Later in the 1980–1990s came three pieces of legislation—CAFTA, NAFTA, as well as the growing importance of the new and existing Buy America legislation. Those pieces of legislation had a very large impact on our region and economy.

Bill gave me many opportunities to grow and I learned an enormous amount from him. I’d say that he had the most impact on my career of anyone. I’ve also had the benefit of working with Jim Fitzpatrick and Ron Stafford.

SB: What was the best piece of advice you ever received?
BO: Learn how to think and adapt. This advice came from a number of people, including my father.

SB: If you could start your professional career over again, what would you do differently?
BO: Virtually nothing. [laughs] There is very little I would do differently. Most of what happened to me happened by accident. I am someone from Long Island who went into the Air Force, wound up in Plattsburgh and never expected to stay. I have had a great life. A fair amount of this was due to being in the right place at the right time.

SB: Serendipity may be part of the story, but there’s got to be more. What else do you think contributed to your success?
BO: I think there are two things. First, I wasn’t afraid to walk through the open door. In other words, to take risks. Secondly, I worked hard. I put in a lot of sweat equity. Success is based upon how you react to the information you have.

SB: How do you decide which risks are worth taking?
BO: Everybody has a tolerance for risk, some greater than others. I certainly have made mistakes. I took risks that didn’t work out. I still take risks that don’t work out. You have to understand what the downside is before you take the risk. The question you have to ask yourself is whether the downside is acceptable. If that isn’t accept- able to you, don’t take the risk.

SB: If you could have dinner and spend an evening with any well-known person, living or dead, who would you choose and why?
BO: Bill Gates, because he is a person who put together a business from nothing. He did not complete a college education, has done an outstanding job with his business, and has given a tremendous amount to charity through his foundation.

SB: What is something no one would guess about you?
BO: I have a great interest in Irish history and I consider myself quite knowledgeable. When I was about 12 years old, a band known as the Clancy Brothers appeared on the Ed Sullivan Show. I enjoyed it so much that I went out and bought their records. Gradually from lis- tening to their ballads I picked up pieces of Irish history, and began talking to immigrant family members and reading a lot.

SB: What do you do in your free time?
BO: I enjoy being outside and exercising. I like mountain biking, kayaking, walking, playing tennis, and golfing. In the winter I like to snowshoe and cross country ski. I usually read three newspapers a day. We do a fair amount of traveling to California and Washington, D.C. because that is where our kids live. We usually head south in February and April for a winter break, and take periodic international trips.