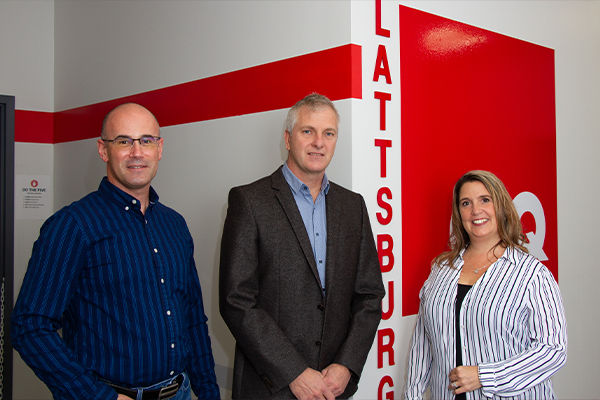 While many in the area are familiar with Canadian companies like NOVA Bus and
Bombardier, not as many know about AQ Wiring, the manufacturer that produces the
wiring and harnesses needed for many local transportation manufacturers. Formerly
the Quebec-owned company BC3G, AQ Wiring Systems has been in Plattsburgh in
some form or another for over a decade and is the primary supplier of wiring for
Volvo buses and marine craft.

BC3G became AQ Wiring Systems after the Swedish company purchased it in 2018. The company already had control of Volvo’s European market, so it was only natural that it sought out the company doing the wiring for Volvo’s American market. After the purchase, AQ became the main supplier for Volvo’s wiring worldwide, making up 80-90 percent of its business overall.

Originally AQ opened its location in Plattsburgh to be near NOVA Bus. They were already Nova’s main supplier for wiring and harnesses in Quebec. In addition, the company was drawn by the possibility of supplying the needs of
other companies in the area.

The Buy American Act, which requires federal agencies to procure domestic materials and products, has only made AQ’s desire to be in Plattsburgh stronger. A location in New York was also important to them because New York City is the biggest customer in the world for buses, and when New York State puts out bids for new buses, it prioritizes manufacturers located within the state.

A Plattsburgh location was not just appealing because of NOVA Bus and other companies. “The cost of building materials is relatively consistent around the world,” explained Rob Gibeault, Plant Manager. “The big factor is labor costs.” Now that the cost of labor is comparable to other North American countries such as Mexico, that consideration is becoming less relevant.

AQ Wiring Systems has found general operational costs to be reasonable, and believes the United States is well-positioned to answer market needs for the complex and specialty vehicles they help make. Workers with a base knowledge of the transportation industry are available because of the presence of the local manufacturing and transportation sector. The programs at the Institute for Advanced Manufacturing at Clinton Community College and programs at Champlain Valley Educational Services and Franklin Essex Hamilton BOCES also prepare potential employees for jobs at AQ.

The Plattsburgh site is just a small part of AQ Wiring’s operation. In total, the company has 7,000 employees and 42 locations worldwide. Wiring and harnesses are not the only products the company makes. It also does wiring for rail cars and electrical vehicle charging stations and also serves niche markets. Plattsburgh was the sole American location until recently when the parent company purchased a location in Virginia. Since the Virginia location does not do wiring, Plattsburgh remains the company’s only wiring site in the United States.

With 120 employees the Plattsburgh location is smaller than most of AQ’s facilities. Many of the others average 700-800 employees. The North Country site was designed to be identical to its Quebec location that employs 140. NOVA Bus is not AQ’s only customer at the Plattsburgh location. According to Gibeault, AQ currently has 30-40 customers and is “expanding every day, always trying to increase our base of customers.”

Three years ago, AQ Wiring relocated from the industrial park on Military Turnpike in the Town of Plattsburgh to its current site on the former Air Force Base to satisfy its need for more space. The new site, off New York Road, provides improved working conditions for employees including air conditioning, better lighting, more parking, and a cleaner environment. There is also plenty of room to expand, which is fitting since plans are already in place to add to the facility in the next five years.

If you drive by AQ Wiring, you will notice a “We’re Hiring” sign. Signs like that have become common place in recent months as employers struggle to incentivize workers to return to their jobs, but Gibeault explained it is something AQ always has by its entrance. “We are always hiring,” he explained, “We like to interview and hire on site. Gibeault believes the environment and a newer style of management is what employees are looking for and why hiring has been successful while other companies continue to struggle.

COVID has been a minor setback for AQ. At the start of the pandemic operations closed for two months, but the company was able to get back to business quickly and “since then things have been decent,” Gibeault observed. A few employees had COVID-19, but not many had to take leave due to quarantine orders.

AQ is doing well with its supply chain and has avoided major disruptions. Gibeault noted that the operation is a bit below projections, but he is pleased with the work they have been able to complete under these unusual circumstances.

Gibeault, originally from Canada, arrived in the United States in 1993 and worked at Bombardier before moving to AQ Wiring in 2016. After five years, he is excited for the future and the ability to expand at the company’s currently location. As the demand for electric buses and trains increases, the future looks bright for AQ Wiring.