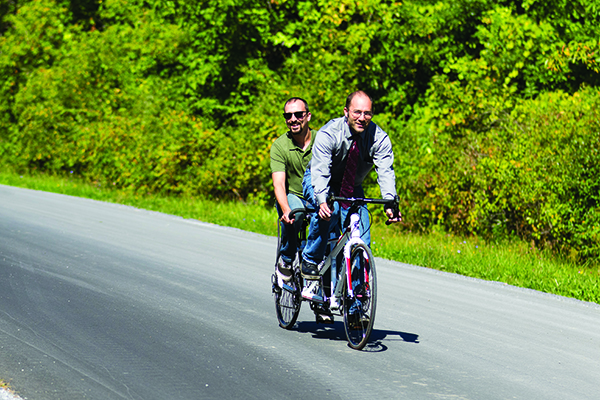 Town of Plattsburgh senior planner Trevor Cole and City of Plattsburgh’s director of community development Paul DeDominicas have just engaged in the ultimate “trust fall.” It was Cole’s idea to borrow a tandem bicycle from Maui North for a photo shoot with Strictly Business to demonstrate how the town and the city work with each other like a well-oiled machine. While their work together on “Complete Streets” initiatives and planning almost always goes swimmingly, what they hadn’t bargained for is that riding a bicycle built for two can be a little more treacherous. (Disclaimer: No town or city officials were harmed during the taking of the featured photo.)

Local Boys Make Good
SUNY Plattsburgh’s ideal graduate is someone who comes to the North Country for their undergraduate degree and stays in the region after graduation to pursue gainful employment in their field of study.

A graduate of Peru High School, DeDominicas obtained bachelor’s and master’s degrees in Public Administration from SUNY Plattsburgh. He began his career at the North Country Workforce Investment Board and moved to Clinton Community College in 2009. Two years later, he became its director of Community and Workforce Development. While at Clinton, he had a hand in creating the SUNY 2020 Challenge Grant that resulted in a $12.7 million award to build the Institute for Advanced Manufacturing on campus. He has been with the City of Plattsburgh as director of community development for the past two and a half years.

Cole grew up in Helena, NY, and earned a bachelor’s degree in Anthropology from SUNY Plattsburgh in 2002 and a bachelor’s degree in Environmental Science in 2006. He was employed as an environmental scientist at Atlantic Testing Laboratories at PARC and as a chemist at Wyeth/Pfizer. He has been a planner at the Town of Plattsburgh since 2011 and in 2016 became senior planner and department head. In addition, he is a member of the Beekmantown Planning Board. “I’m all about hard work and creativity,” said Cole. “I want to facilitate the best ideas our community dreams up and (use) the planning process to bring about real, positive outcomes for our community.”

Happy Together
Cole and DeDominicas have an appreciation and respect for the yin and yang between the Town and City of Plattsburgh. The community of more than 30,000 residents—11,000 of whom reside in the town, and the other approximately 20,000 of whom reside in the city—is a complex playground in which to negotiate change and development. Both the city and the town have waterfront bordering Lake Champlain; the beach and marina are city properties, while the Plattsburgh Airbase Redevelopment Corporation (PARC) is in the town; Plattsburgh International Airport and the Route 3 shopping corridor are town assets; the city encompasses downtown restaurants, shopping, and parks; the beautiful Saranac River meanders through both.

In many communities, there might be a struggle for resources or funding, but the two officials know better than to waste time elbowing each other out of the way for a prize. “Whatever happens in one area is impactful on the other,” said Cole. “They are inextricably linked.” For example, Norsk Titanium US Inc. has chosen to call the Town of Plattsburgh home. But because current and future employees will need arts, culture, and housing, Norsk is mentioned in the city’s Downtown Revitalization Initiative (DRI) Governor Andrew Cuomo’s grant-funded program to transform downtown neighborhoods into vibrant communities. The City of Plattsburgh is the recipient of $10 million in DRI funding. Those employees from Norsk Titanium and other employers and their needs will be taken into account as the city works with several state agencies, NYS Homes and Community Renewal, and the North Country Regional Economic Development Council to complete six development projects along with two others spearheaded by the North Country Co-op and The Strand Center for the Arts.

“Neither of us can do our jobs well without serving everybody,” said DeDominicas. “The communities are not competing with each other; rather they complement each other and that drives success.” Both recognize the strengths of the town—recreation, shopping, residential, and services—and the city—cultural arts core—and they work together accordingly, even adding language to a grant to include consideration for the other community’s residents and their needs. “There’s no such thing as a good project in the city that is bad for the town, or a good project in the town that harms the city,” added Cole.

Recently, the City of Plattsburgh received a grant from the American Battlefield Protection Program. DeDominicas explained the hope is to link sites in the city to historic sites in the town, thereby leveraging the grant to mutual benefit. The two entities will work together to obtain future funding and will share information on a regular basis. “We have a theme meeting one time per month to make sure we touch base from a planning and development standpoint,” explained DeDominicas. “Visitors don’t see a line; residents don’t see a line between our communities.” And neither do DeDominicas and Cole.

Complete Streets
The National Complete Streets Coalition was formed in 2005 with the purpose of encouraging transportation agencies, planners, and engineers to change their approach to designing community roads in order to enable safe access for all users, including pedestrians, bicyclists, motorists, and transit riders. The City and Town of Plattsburgh can often be found working together on initiatives and projects with this concept in mind.

A few examples:
1. The city and town have identified properties south of the Terry Gordon Bike Path for possible development as part of an extension of the bike trail that would bring riders to a park on the waterfront.

2. Elevate Plattsburgh hopes to link the Route 3 corridor to downtown through pedestrian, bike, and vehicle connectivity with the exploration of possible uptown/downtown bike rentals that would allow visitors to rent a bike at dock street and ride uptown.

3. In the Spring of 2017, the two municipalities revealed plans for an extension of the Saranac River Trail Greenway called “Blue Trails.” The next phase of the project, a feasibility study, is expected to begin soon. At minimum, the new, 2.5 miles of trail would extend from George Angell Drive through Rugar Woods and end at Reeves Lane.

4. The city and town are also exploring a 2.2-mile extension of the bike trail from the city to the town at the Plattsburgh International Airport. Effective Listening For any of these projects to have “real legs,” many pieces need to fall into place. Plans for riverfront access and streetscape changes must be vetted in consultation with many organizations—including dam operators, the NYS Department of Transportation, landowners, department heads, business owners—and a host of environmental and sustainability concerns must be addressed. “You can do all the planning, but we also have to listen to the important feedback being offered by the community,” said DeDominicas. “I like to approach everything as an opportunity to listen to people’s opinions. That’s how change happens, by pulling all that input together to move the city in the right direction.”

Cole highlighted the advantages of getting away from your own ideas. “We have to listen in order to make the community part of the plans. They give valuable insight into what is feasible and what is not,” he said. Cole and DeDominicas coordinate meetings so that city and town residents can weigh in on issues affecting them. The city recently posted a survey on Facebook asking how important parking was to downtown visitors and residents. Within two days they had received an overwhelming 468 responses that were thoughtful and engaging. “Community residents are the specialists of their street,” said Cole.

Both independently and in collaboration, Cole and DeDominicas try to follow a format that seems to be working:
1. Clearly articulate an opportunity to the community.

2. Consider the options—administer studies and report back so all can understand the impact.

3. Help the community decide what is the most appropriate action.

The city recently worked with an outside consultant on its downtown parking conundrum and he had kudos for the local government’s ability to communicate. “He told me that he usually goes to places where people are already yelling at each other. He noticed that here, everybody talks to each other,” said DeDominicas. “We have a good working relationship and it goes a long way when people from the outside come in and notice that.”

Slow And Steady Wins The Race
Warren Buffet once said, “Someone’s sitting in the shade today because someone planted a tree a long time ago.” Although some initiatives take more time than might seem necessary, it’s all part of the process and a slower pace often leads to the best result. Take planning a park, for example. “You want to make sure you get it right,” said DeDominicas. “There is a benefit to the timeliness, which includes a little push at the end that makes it happen.” Cole has learned to embrace the speed that certain projects take to implement. “Eighteen months versus six months can make all the difference,” he explained. Planners will often look to other communities as models: How did the ones that made a move make out?
What about the ones that didn’t make a move? Where are they now?

“We are the biggest little thing around: We are an economic hub, an educational hub, a shopping hub. We don’t have a lot of peers; we are a unique community,” said Cole. “We are building a model of our own: Our uniqueness lends itself to opportunities.” Added DeDominicas, “We realize that rapid change on a community scale doesn’t work well.” Listening and helping the greater combined community understand that change is going to happen and hoping that residents buy in is a challenge with a silver lining. “You are working with people who care about their community, so even if they are in opposition, you know they still care and you can incorporate their ideas,” added Cole. “Administrations change, the politics of the moment can change, but strong community development plans tie the community together and outlast everything else.”