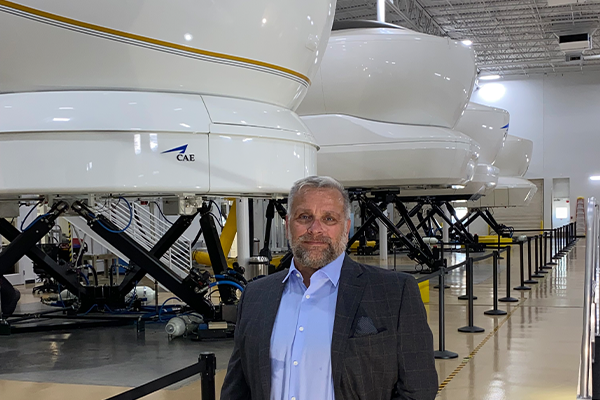 Claude Landry stopped in Plattsburgh on a trip to Montreal and fell in love with it. It was what he called “a twist of luck” that prompted him to move to the North Country and renovate an old building on Bridge Street for his flight simulation business.

Landry grew up in Montreal and went to work for Canadian Aeronautical Electronics CAE) in 1980 when he was 19. CAE is a global company that specializes in simulation for aviation, healthcare, defense, and security. It has the largest civil aviation training network in the world.

After spending 29 years with CAE, Landry set out on his own six years ago “I am very proud of what we’ve accomplished,” he offered. The company provides relocation, installation and maintenance of flight simulators worldwide. The corporate office is located in downtown Plattsburgh and its operations office is in Montreal.

Landry initially operated the business from Dallas, but needed to be closer to Montreal since the company does a great deal of contract work with CAE. Plattsburgh, he said, “is the best of both worlds. It is close to Montreal and has Lake Champlain and the mountains to provide beautiful vistas and recreation.” Additionally, his wife, who does not speak French, is happy to be living in an English-speaking area.

FAMILY BUSINESS
Landry Simulation is a family business. His two daughters and two sons-in-law are all involved. While he admits family and business can be difficult, he explained, “We know where the boundaries are.”

Whitney Skye Canales joined her stepfather’s company five years ago as the Chief Financial Officer. Canales grew up in California and then moved to Arizona where she met her husband, a U.S. Marine. She studied sociology and worked in government administration focusing on family services before coming into the family business. Although social work and flight simulators are quite different, Canales explained there are many “logistical parts to putting families back together that apply to the simulation service business.” The logistics of moving a $10 million machine and reassembling it, often in another country, can be more complicated, but the skills from her social work experience have proved useful in her current role.

As CEO of the company, Landry wears many hats. He is involved in strategic development and oversees the operation’s logistics. “In one day, I touch just about everything,” he said. Landry has been working in the industry his entire adult life and said he truly loves it. He appreciates the opportunity to travel and work with cultures all over the world. “It’s exhilarating.”

Flight simulators are a key component of aviation. “Without flight simulators, you don’t have pilots,” Canales explained. The Federal Aviation Administration (FAA) requires all pilots to do a certain number of training hours each year. The real purpose of simulators, Landry said, is to keep people safe. Even after four decades in the business, he is still amazed by the machines he works with every day. “The engineering is awesome.” He added that the ability to take something that doesn’t fly and recreate a realistic flight environment is truly incredible.

COMPLEX PUZZLE
Landry Simulation works on “the world’s most complex puzzles,” Canales explained. “Team members travel all over the world to break down an entire simulator, pack it right so it doesn’t get broken, then unpack it and put it back together in a completely different location.” The time required to relocate a machine depends on the type and quantity of the simulators, but also the availability of team members. Projects can be held up by Customs, natural disasters and political unrest. “We are well aware of geopolitical issues globally,” Canales said, adding that they keep very close tabs on weather and natural disaster forecasting in areas where they have teams working. “It’s always something, so we’re constantly on guard.”

Simulators are designed to mimic specific aircraft so they vary in size as aircraft themselves do. “The simulators are essentially airplanes. They have a tail number and they are FAA certified,” Canales explained. “When pilots come in for their recertification training hours, if there is an obstruction within their sight field, it is considered an aircraft on the ground (AOG) and the simulator is taken off line so that the sight obstruction can be fixed. “Every minute a simulator is down, the training center is losing money,” she observed. “Many of our contracts require us to come in and fix things quickly.”

A thin-film mylar mirror is placed around the circumference of the visual bowl of each simulator and the backscreen image is projected onto it. The film is lightweight but dense. “It is the only thing within the industry that will hold, stretch and reflect the image without obstructions or distortions,” Canales said. Landry Simulation was able to identify a manufacturing stream for the film which had been hard to find. The company now cuts and sells the film for the industry and specializes in the replacement and cleaning of it.

DYNAMIC WORKPLACE
It is hard to find employees who have experience working with simulators so Landry hires people who are multi-disciplined and have the right skillset and attitude to fit with his team. He then personally trains them in the field. Because the job is so specialized, it often takes years for employees to come up to his high standards.

Some of the local workforce in Plattsburgh has graduated from programs at CV-TEC and the ADK P-TECH school. Many of the company’s employees had never been in an airplane before coming to work for Landry Simulation.

Landry emphasizes a positive work environment and takes pride in what he calls his “fantastic team” as well as the physical appearance of his building. Being a mentor to staff members and encouraging discussion and the exchange of ideas is important to him. He admits he can be tough, but concluded, “There is good synergy between us.”