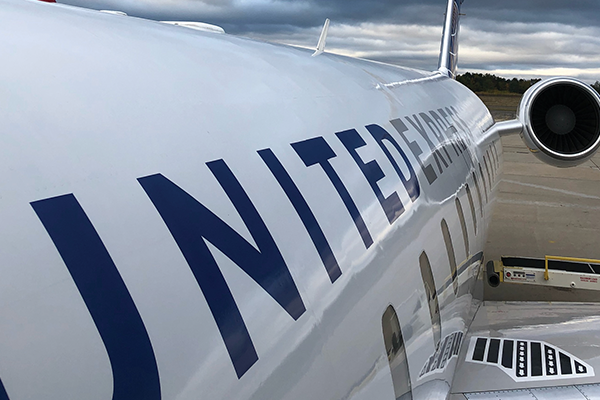 In 1978, the Air Deregulation Act (ADA) provided airlines with the autonomy to choose which markets they wish to serve within the United States. This posed concern for rural communities being left by the wayside. To ensure rural communities were supplied with a minimum level of service, the Essential Air Service (EAS) program was put into place.

How does it work? Designated EAS airlines agree to operate daily flights to medium or large airport hubs. In exchange, the U.S. Department of Transportation (USDOT) provides that carrier service with subsidies that help to balance the expense of flights leaving rural com- munities with empty seats.

Plattsburgh International Airport has most recently partnered with SkyWest Airlines co-chairing with United Express Airlines as its EAS carrier, Consequently, this ended the existing EAS partnership with PenAir, which didn’t occur without its fair share of controversy. The biggest change? Daily connections to Washington D.C. instead of Boston.

ARTICULATING THE “WHY” IN “WHY COME TO PLATTSBURGH”

Before the bidding process could begin, a local team of consultants and Clinton County leaders had to conduct extensive market research. The team sought to confirm how large an operation the region could support. Secondly, the team needed to “sell” priority EAS airlines on why Plattsburgh would be worth the investment. “You have to articulate the ‘why’,” said Chris Kreig, Director of the Plattsburgh International Airport. “Why is it good for them? What’s in it for them?”

Through this process, the opportunity was identified. Using the market study, the team established a formal Air Service Development Plan, forecasting the trajectory of Plattsburgh International Airport for the future. The plan highlighted the value of attracting a major airline. Ticket sales, as one example, provided Kreig and his team with the information they needed to support the needs of local travelers.

“We did the market study of the [Plattsburgh International] airport as it pertains to the region and what the opportunities were for potential air carriers to come in, and what areas we were losing passengers to,” said Kreig. “We saw what this region was capable of with the right air service.”

An unprecedented six proposals came in for the Plattsburgh EAS bid. “That was unheard of,” said Kreig. “In my time of doing this between here and Saranac Lake, I’ve never had six proposals come in for an EAS bid. That was significant in itself.”

Local leaders (the mayor of Plattsburgh, Town of Plattsburgh Supervisor and Clinton County Legislators) carefully reviewed the proposals and concluded that United Express Airlines operated by SkyWest would be the best decision for Plattsburgh at this time. Their recommendation was forwarded on to the USDOT for consideration and the agency ultimately, made the final decision in support of SkyWest.

For any EAS bid, there are five essential criteria that the USDOT uses to review proposals, which are publicly available at www.transportation.gov. Ultimately, EAS providers are assessed by (1) their ability to demonstrate reliability, (2) the contracts previously established with a large airline carrier, (3) the interconnectivity agreements that allow for seamless reservations, ticket purchases, and baggage check-in, (4) the recommendations of local elected officials, and (5) whether the carrier has a plan to market its service in the community.

A NEW TENANT WITH WORLDWIDE CONNECTIVITY

The ultimate goal of the decision was long-term growth for the greater Plattsburgh community, not simply to operate as a basic airport hub. “PenAir provided a service here and we truly appreciated the service they provided, but we felt there were opportunities we could pursue that would give us better connectivity,” said Kreig.

Kristy Kennedy, VP of Marketing and Director of Tourism for the North Country Chamber of Commerce agreed. “PenAir took us to a great spot with what they were doing, but we knew this market could grow,” she said.

Kennedy applauded Kreig and his team for helping Plattsburgh International Airport access “legacy carriers” with United Express. “We’ve now grown to the point where we can use this EAS service not just as a hub but to serve the community to get them into a bigger sys- tem,” said Kennedy.

The team at SkyWest shares the excitement about coming to Plattsburgh as well. “Plattsburgh is a great community and made a lot of sense for SkyWest Airlines,” said McKall Morris, the airlines Manager of Corporate Communications. “Giving access to excellent local air service means more convenience for Plattsburgh travelers and we believed it would be worth pursuing.”

According to Morris, SkyWest Airlines has a reputation for solid performance and operational excellence. “For 46 years, SkyWest has been connecting communities like Plattsburgh to the world through reliable, convenient air service. We already love being a part of the community and look forward to seeing more Plattsburgh travelers utilizing the service,” said Morris.

Plattsburgh International Airport is now connected to the major transportation system in a way like it’s never been before, according to Kennedy. “We needed that next level of connectivity. Now you can go to www.united.com and say ‘I’m starting in Plattsburgh. I can get to just about anywhere,” said Kennedy, referencing the seamless connectivity between SkyWest and United Airlines systems.

According to Gibbs, United Airlines has the world’s most comprehensive travel network, which gives travelers a strong list of international flight options as well. “A short flight from Plattsburgh to our Washington Dulles hub will not only provide direct access to the nation’s capital but more than 70 domestic and nearly 40 inter- national destinations in Asia, Europe and Latin America,” said Gibbs

The transition has been very smooth, according to Kreig. In particular, he has been impressed by the interconnectivity of the systems, professionalism of the staff and overall quality of the service. “It’s truly like a well-oiled machine,” he said.

“I’ve received a lot of positive feedback from the community regarding the service,” Kreig continued. “People are able to make connections that they were not able to make previously. There are still some things we’re trying to improve, but the service has certainly exceeded expectations.”

Kennedy has also heard positive feedback from travelers making their way to Plattsburgh that, otherwise, never would have made the trip in the past. During a recent trip to San Francisco, which originated from Plattsburgh International Airport, Kennedy spoke with a handful of other travelers who couldn’t stop raving about the new opportunity they have to visit relatives in the Adirondack region.

The direct connection to D.C. has benefited local veterans participating in the North Country Honor Flight as well. According to Kreig, the most recent trip to D.C. for WWII veterans was a huge success. In addition to the convenience, Kreig received feedback that North Country vets were welcomed with even more “pomp and circumstance” than ever before when they arrived directly in our nation’s capital. According to Kreig, North Country Honor Flight has used the service four times since August.

SkyWest has also been impressed by the quality operations of Plattsburgh International Airport. “The Plattsburgh Airport team has been incredible to work with,” said Morris of SkyWest. “Our partnership with Plattsburgh has been excellent since the first day and throughout our first months of operation the Plattsburgh airport team has continued to show that they are a top-quality airport.”

BOOK YOUR NEXT FLIGHT FROM PBG

According to current data, Kreig confirmed that the new service is being used more than previous services. After only two months of operation, United Express operated by SkyWest has reached a 55% load factor (i.e. percentage of passengers per flight) with a larger aircraft than PenAir was utilizing. According to Kreig, PenAir was closer to a 40% load factor over six years.

The key to success will be continued utilization of the service. “The more we use it, the more we benefit,” said Kennedy. Morris agreed on behalf of SkyWest. “The success of air service in any city is dependent on com- munity support. We’ve been pleased with the support from Plattsburgh so far and hope to see growth in the future.”

“Travelers can support the service by booking flights at united.com,” said Morris. “Each of the twice-daily flights from Plattsburgh to Washington-Dulles are timed to provide maximum connection opportunities for both business and leisure travelers, and, with hundreds of United and United Express flights from Washington-Dulles, Plattsburgh travelers have access to destinations around the globe!”

It’s certainly too soon to confirm details, but Kreig is proud of the work being completed for a new U.S. Customs Inspection Facility at Plattsburgh International Airport. At this time, a North Country resident can fly inter- nationally with a flight originating from Plattsburgh, but cannot land in Plattsburgh from an international flight. Kreig and his team are working hard to change that.