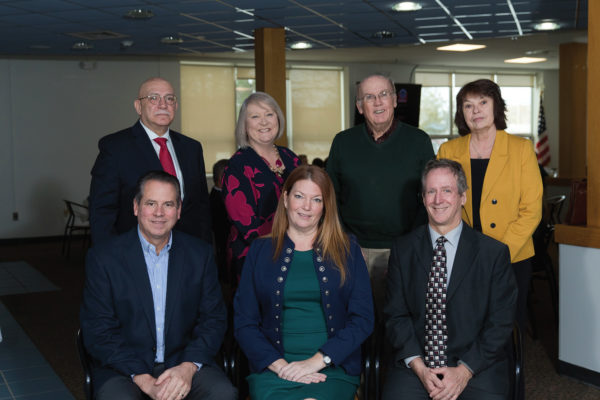 In early December North Country business leaders came together at the MHAB Life Skills Center to celebrate 2019. The annual Strictly Business Forum joins business owners and managers in round table discussions to evaluate the year as it comes to a close.  This year’s event was especially significant because it was the 30th anniversary of SB’s first Forum.

Guests at my table were:

Attorney MaryAnne Bukolt-Ryder has been in practice for three decades and her business is thriving. “Things have been going very well. One of the things that has impressed me most was the recovery the community made after the closing of Plattsburgh Air Force Base.”

Colin Read came to the North Country fifteen years ago to serve as dean of SUNY Plattsburgh’s School of Business & Economics and chose to remain in the area when he left the position. He is now mayor of the City of Plattsburgh. Steven Bailey’s family founded Bailey Ford of Malone in
1966. He is now president of the company’s newest dealership in Plattsburgh and his son Andrew is the General Manager of Bailey Ford Malone, making it a fourth generation Ford family business.

Over the past 20 years Connie Wille has watched the North Country community re-define itself and work diligently to reduce the stigma of drug and alcohol addiction. “I am humbled to do what I do and be a small part of helping those in need move from illness to wellness,” she said.

Ray DiPasquale relocated to Plattsburgh to assume the presidency of Clinton Community College three years ago. He is emphatic that the most attractive thing he found when he arrived was the community. Three years later he remains impressed. “The North Country is very lucky to have leadership of our town and city that focuses on attracting businesses.”

Bob Smith recently retired as president of Nine Platt Hospitality Group, owner/operator of Best Western Plus Hotel and the Ground Round Restaurant and Bar in Plattsburgh. Smith offered a challenge to our Forum group to embrace a more resilient and optimistic approach to change.“What we should do is embrace evolution! Competition is your friend. It’s good for business!”

Our table was unanimous in the belief that any discussion of the evolution of business over the past 30 years would be incomplete without acknowledging the work done by Garry Douglas, president of the North Country Chamber of Commerce, as a lobbyist and a fierce advocate for the area as well as the work of the Plattsburgh Airbase Redevelopment Corporation (PARC). Together they wasted no time repurposing and parceling the land and developing the transportation/manufacturing hub that has laid the foundation for the area’s progress.

It is that community minded grit and resilience that has led to some great things for our area. A key example is the SPARCC (Substance Abuse Prevention and Recovery of Clinton County) Coalition. Wille explained,“The SPARCC Coalition is a shining example of what happens when people think outside of the box and work towards a common goal. The group is made up of concerned citizens, individuals from the helping professions, law enforcement, and business leaders who all wanted to make a difference when the opiate crisis hit our community.” Her observation brought nods of affirmation around the table. It seems we are always better together.

Despite positive comments, our group recognized that there are challenges to be faced, chief among them are employee recruitment and retention. Wille commented that, as a nonprofit entity, “It is difficult to compete with New York State salaries and benefits. However that motivates us to provide the very best working environment we can for our employees.” Historically, Champlain Valley Family Center has recruited through internship programs from local colleges, offering tuition reimbursement programs and assisting employees with credentialing and licensing. “We strive for a supportive environment at the agency, manage to have some fun and operate as a team.”

“When someone comes to work for Bailey Motors, it’s like joining our family.” —Steven Bailey

“The retention problem is a factor that exists all the way through the labor market,” echoed Smith.

Our best practices discussion centered largely on facilitating education. Bailey said, “We hire and train employees in house. That approach has provided us with generations of a dedicated and loyal workforce and turnover is low, which is ideal. When someone comes to work for Bailey Motors, it’s like joining our family.” Between the two dealerships, Bailey’s has upwards of fifty employees.

Clinton Community College’s Institute for Advanced Manufacturing is a tremendous asset for the area. DiPasquale emphasized, “Our AMI is a catalyst for training. We provide a venue so the employees can learn the skills they need and stay where they are employed. NovaBus recently rented the facility, brought in its own high tech bus and conducted a training program.” While Clinton remains on the cutting edge of technology education, with a new drone certification program among others, it also remains available to meet the needs of the business community, providing skilled workers for the specialized manufacturing that is taking place in the North Country.

Mayor Read stressed, “We’ve got to compete with other areas to attract more people to our region. The workers we need aren’t going to come from Beekmantown or Peru. Our goal needs to be to attract people to Plattsburgh over places like Boulder, Colorado or Eugene, Oregon. Locations like that are our competition.”

Commenting on recruitment, Smith stated, “A vibrant downtown Plattsburgh is vital to the future of the entire area and we need all of our governing entities to make that happen.” No one disagreed, with the qualifier that a cooperative funding plan that goes beyond city tax payers needs to be sought.

Smith offered, “We have an abundance of water. It is a life blood that we need to take advantage of.” Continuing on that theme, Read added,“The City of Plattsburgh produces four times more water than it uses on a given day. We’d like to share that resource. On the other hand, the
city is challenged because we can’t increase our geographic footprint. That hampers our financial sustainability and it also holds back regional economic development. We don’t have any land to offer those who may seek our abundant water and incredibly low cost and 100% sustainable electricity. To fail to attract a potential environmentally friendly manufacturing center because we don’t have the land is a dreadful shame, and one we can ill-afford.”

DiPasquale explained Second Chance Pell Grants that are being rolled out. The grants are designed for inmates to pursue an education in the trades while incarcerated. Ideally, when they have served their debt to society, they emerge with skills and are able to secure a job that pays a
livable wage. “We are trying to make sure that we have businesses that are willing to hire the former inmates after they have been screened.” Clinton Community College, in collaboration with Clinton and Altona Correctional facilities, has gone through phase one of the approval process for the grants. “Our congressional delegation is behind us and Garry Douglas is leading the charge. We are hopeful we will get approval by February or March 2020.” Allowing the opportunity for inmates to break a recidivist cycle and recruit skilled labor to our area sounds like a win-win.

Wille emphasized that while there is still a lot of work to be done in substance abuse prevention education in our community, she is encouraged by some of the changes from New York State Office of Addiction Services which have helped the Family Center’s staff work with more residents, particularly A.L.I.C.E (asset limited income constrained employed) individuals

Bob Smith could easily be referred to as the “Godfather of the Hospitality industry in the North Country” with a successful history that goes back at least six decades. Smith was one of the founding fathers of Vision to Action, an area advocacy group comprised of North Country
business leaders. He, along with the rest of our table participants, expressed an interest in seeing the creation of a similar group that could develop a plan to address the recruitment issue that isn’t confined by politics or geography. “The ideal approach would be a shared cost plan to
assess where we are, what we have here in the North Country and what we need to do to attract new residents.”

Throughout our discussions in the new MHAB facility, provided by a pioneering partnership between the public and private sector, 30 years of Strictly Business covers featuring business leaders and legends scrolled through on three video screens. Over the years the faces have
changed and our challenges have evolved but one thing remains the same—the North Country’s ability to survive and thrive.

“I was working for Ron Stafford’s law firm, Stafford and Edwards, and covering for all the partners who were still not back from their holidays!” MaryAnne Bukolt-Ryder Attorney

“I was experiencing my first of fifteen winters in Alaska. It is a state that attracts a great diversity of humanity, but always remains embracing and tolerant of different beliefs and opinions. Our nation seems so far removed from that now, but I’m hopeful that optimism and mutual
respect can again return.” Colin Read  City of Plattsburgh

“I was living in Saranac Lake and was three years into my career working with the Substance Use Disorder population. That was a wise career choice for me, as it has been fulfilling on many levels.” Connie Wille Champlain Valley Family Center

Justine Parkinson was born and raised in Montreal. Twenty years ago she came to the North Country where she works as an educator and writer.