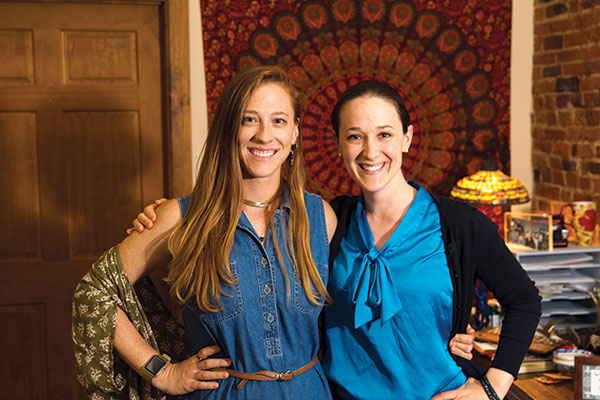 Danielle Talley and Morgan Gordon grew up watching their mom, retired Zone Sergeant Mary Dupell, break records and command respect throughout her 25-year career in the New York State Police. Less than 10 percent of those serving in law enforcement positions are women, and Dupell demonstrated to her girls from an early age, “You teach people how to treat you.”

When Dupell retired, she wouldn’t accept the Gray Rider Monument unless it represented her gender. The statue, given to all men and women who wear the New York State Police Uniform as a lasting tribute to their honorable service, loyalty and sacrifice, was historically a statue of an old fashioned Trooper—a man—poised and ready for duty.

After a long hard fight with a dedicated cohort of women, Dupell’s Gray Rider Monument looked a little different. “She fought tooth and nail because she wanted that statue to have boobs,” Danielle declared. “And a little bun in her hair,” continued Morgan. “And hips. And she got it!” Danielle punctuated the point.

They don’t quite finish each other’s sentences like some twins do. The synergy in Morgan and Danielle’s communication style is more complimentary; they express themselves more completely when they tell a story together. Whether they’re operating together or solo, the fraternal twins are like their mom—forces to be reckoned with.

More opposite than they are alike, there’s a sense that deliberate contrarian forces intertwined 28 years ago to birth these brilliant, bold, and beautiful beings into the natural world.

Now, after traveling across the country and around the world to earn graduate degrees in seriously impressive and complicated areas of study, Morgan and Danielle have both returned home to Plattsburgh make their marks in industries at different ends of the spectrum. Their opposing strengths give rise to them as young professionals, to their bond as twin sisters, and, as you’ll see, to the entire community.

Twelve-hour workdays are nothing for Morgan Gordon, so it shouldn’t be surprising to see her still perfectly put together after a regular old eight-hour day. Regimented, focused, and highly attentive to detail, it’s hard to describe Morgan without using classic resume bullets. She admits it herself, right down to the way she dresses, she’s a stereotypical businesswoman fully guided by logic and reasoning.

What sets her apart, and has earned her promotion after pro- motion in the marketing department at Swarovski Lighting in Plattsburgh, is the astounding clarity with which she communicates; her education (she blew through her B.A. program at SUNY Plattsburgh in three years, majoring in Public Relations and minoring in Psychology, and earned a master’s degree in Organizational Communication and Public Relations from University of Wisconsin Stevens Point); and a deeply ingrained competitive nature.

“We were raised to be fierce,” said Danielle. “But in a good way,” Morgan added gently.
Morgan started her career with Swarovski right out of college six years ago, first as marketing communications coordinator. The lat- est in a string of promotions came this January, with a bump to sales
and marketing manager. Morgan is the lone marketing person at the Plattsburgh facility, reporting to her boss and mentor Catherine Miglorie in Cranston, Rhode Island. “I have the good fortune of hav- ing a really tremendous boss who is a great mentor. What a woman she is. Your boss has a lot to do with how far you go and how well you fit into an organization,” Morgan said.

She said one of the coolest parts of her job working for Swarovski Lighting—the luxury lighting arm of the world-renowned Swarovski group of companies—is traveling to showrooms around the country to conduct training sessions about brand history, product knowledge, selling points, crystal types, new products, and bestsellers. “I do a lot of training, which fits very nicely into my teaching, because as a trainer you’re basically a facilitator or a teacher.”

Morgan just wrapped up her fifth year as an adjunct lecturer in the Communications Department at SUNY Plattsburgh. She teaches Intro to Communications and this year for the first time took on Business and Professional Speaking, a 300-level course. She said teaching is an exciting challenge that feeds her soul.

“I am bohemian vintage. Like a little bit hippy, but not so much patchouli,” Danielle Talley joked, describing her own personal style. Her natural glow shined out from beneath a canvas of freckles, all illuminated from above by a swanky Swarovski chandelier, procured for Danielle’s restful, healing clinic by Morgan.

Danielle opened Avenue Acupuncture on Durkee Street in September of 2015, giving herself a two-year window to see if she could make the business work in Plattsburgh. She was a little unsure if her home- town could support an alternative practice like acupuncture. Now approaching two years, Danielle sees 30 to 40 clients per week. Asked if she believes in Plattsburgh now, Morgan answered for her: “She believes her 50-person waiting list.”

Naturally, Danielle’s educational journey meandered a bit more than Morgan’s, but after nine years, Danielle focused her free spirit. Recalling how acupuncture had helped Morgan with allergies as a child, Danielle was pulled toward the ancient Chinese practice. A path was set, aligned perhaps by the stars—and sustained by that fiercely competitive nature.

She immersed herself in the wonders of Traditional Chinese Medicine during a two-week internship in China at the Zhejiang University Hospital in Hangzhou, China, where patients are treated holistically with integrated Western and Eastern medicines in the same facility.

Prior to graduation, Danielle made the decision to open a healing practice in Plattsburgh, doing much of the legwork during her last trimester at FLSAOM, meeting with the Small Business Development Center on a school break, building a business plan, creating a website and design- ing a logo. Of course Morgan helped.

“There’s no way I would have been able to get this off the ground without her,” Danielle said. “I love treating. I am a clinician at heart. The business aspect is a challenge for me and that’s Morgan’s strong suit; she’s taught me so much.” For example, Danielle said, “I have no idea about logos. I just know what I think is pretty.”

“And she’s taught me a lot about self care too,” Morgan noted. “I would run myself into the ground trying to get things done, never sitting still. I always want to be working on something. Danielle is trying to slow me down and help me take better care of myself.”

They share a saying that reminds them to nurture themselves. “You can’t pour from an empty cup. You have to be full inside before you can give to others.”

“There’s no way I would be able to do what I do if I didn’t take care of myself. And I think that’s true for everyone. We have this idea in this western world that we are selfish if we take care of ourselves,” said Danielle.

For a long time, between the ages of 5 and 20, the twins didn’t get along. “We didn’t embrace our differences and we pushed each other away,” said Morgan. It took leaving home, living on their own as adults in separate cities to bring them together.

The sisters experienced a real turning point in their relationship when Danielle spent five days with Morgan in Wisconsin. “It was the first time we’d ever spent alone together without peer pressure, social circles, mom and dad,” said Morgan.

Danielle explained, “We grew up. And we realized what our differences are and our strengths. It’s very much yin and yang, a complimentary thing that happened. In the places where I’m lacking, she’s really strong and vice versa. It’s like a light bulb went off. We don’t have to be the same even though we’re twins.”

Big on gratitude, the sisters went back and forth praising one another in the most heartfelt ways, pausing sometimes to offer a tender ‘I love you’ and often squealing with laughter. Or, as Danielle put it, “Just so many thank yous…over and over.”

Morgan concluded logically, “If we had tried to understand each other sooner, we would have an even stronger relationship. People should try to understand other’s perspectives. I don’t think you can truly dislike someone if you understand them.”

Danielle’s wistful conclusion: “Somewhere along this crazy journey we belong together.”