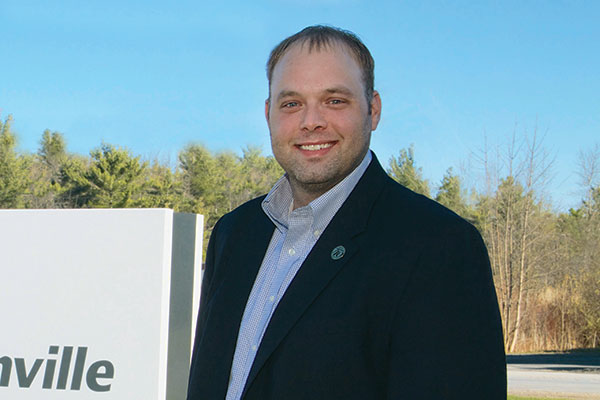 I met Jim and Laura Kopaska in the Spring of 2013 and have worked with both of them professionally and enjoyed their company socially. Recently I had the good fortune to interview Jim in his office at Johns Manville in Plattsburgh, New York. What I discovered and what I hope you will enjoy is a normal life punctuated with early promise, unforeseen challenges, self-discovery, heaps of drive, and unbridled hope for the future. Come along and meet Jim Kopaska.

Small Town Roots
Hailing from Kellogg Iowa, a town with a population of 1000 and no stop lights, Jim Kopaska grew up in a blue collar household. At 6’6″ tall, you’d be making an easy guess that he played on his high school basketball team which played for two state championships.

College 1.0
Jim landed a basketball scholarship at Central College in Pella Iowa, but suffered a knee injury before his freshman year began. “Since they couldn’t give the scholarship to somebody else, I joined the basketball team as a walk-on,” he explained. That didn’t work out very well, but Jim stayed on at the college and took just about every class he could. “Music, Art, Theater, Calculus, Economics,” he enumerated. “I ran the gamut, but I had no idea what I wanted to do with my life”

Standing Up When Dad Couldn’t
During his second year of college, Jim’s father contracted an infection in his leg that left the doctors wondering if it would ever heal…losing his leg was a real possibility. To support his parents during their time of need Jim left college to run the family business. While he was familiar with the work, running a business was entirely foreign to him. “I quickly recognized that I’d have to attract new business if we were going to grow and be successful,” Jim recalled. “I contacted local builders and landed electrical contracting jobs. Some were better than others, but they worked out most of the time.” It was on one of those jobs that Jim began to reflect on the direction his life had taken.

Guardian Angel
A meeting with an engineer from the local power company changed Jim’s life. Over coffee and a donut, at an early Saturday morning at a job site, the engineer questioned what Jim was doing and recommended he consider a career in electrical engineering. After much reflection Jim took his advice, registered at Iowa State University and completed his electrical engineering degree in three years.

Ergo Cup!
After graduating Jim joined the Clow Valve Company in Oskaloosa, Iowa. While he was there upper management entered his cart design in an international competition known as the Ergo Cup. In short, his design would vastly improve the company’s fire hydrant assembly process while also reducing worker fatigue and potential injuries. “We had no aspirations of winning any award,” Jim said, “but thought the product was strong and that the experience would be worthwhile. We were awestruck to learn we had won top prize in the Team-Based Workplace Solutions category!

A Change Agent Emerges
After a number of promotions at Clow Valve took Jim from Iowa to Elmira New York, he joined the Ariens Company, another manufacturer, at its Auburn, Nebraska plant. During his first weeks on the job he attended the annual management meeting and there he met the president, Dan Ariens. “Jim”, he said, “the plant in Auburn is losing money, the employees don’t care and our processes are broken. You have twelve months to turn the plant around or we are going to close it. I hear good things about you, but there is a black eye on you because you are associated with Auburn. I just want you to know the game that you are playing”.

Jim took the opportunity as a challenge and on the bus ride back to Auburn he took advantage of the captive audience to create a vision of how the team could come together to over- come these odds. Once back at the plant with a game plan in place, Jim and the team met with each employee. “We told them what we were facing, what was required to turn the company around and that they could leave if they weren’t on board with this new direction. We made some tough cuts and hard deci- sions, but we had no choice,” Jim emphasized.
Whatever Jim and the team did, it worked. Within 12 months, the company went from losing $1 million a year to making $3 million — a $5 million dollar change! In the second year, the company made $5 million despite reduced sales!

Once the changes were in place and the culture was stabilized, Jim realized it was time for him to move on. As he reflected on this period, he said, “After 2 years of extreme change the plant was in need of a slowdown. At 32 years old I wasn’t ready to slow down so I set out to find my next challenge”.

Before he left, Jim had a conversation with Dan Ariens, the man who had set the course for his success. Dan commented, “You remind me of my younger self. You are a young man in a hurry and unfortunately my company can’t keep up with you right now, but hope- fully someday we’ll do business together once again.” Jim appreciated Dan’s words and confidently set his eyes on the next change in his life.

Plattsburgh Bound
Jim and Laura had recently married and they took both their interests into account when considering the next steps in their careers and lives. While the couple had enjoyed the environment of New York when they lived in Elmira, Laura had once travelled through Burlington Vermont and told Jim, “If we ever leave the Midwest for the east, I would love to live near Burlington.”

It just so happened that one of the positions Jim was considering was with Johns Manville in Plattsburgh. “I visited the area during the interview rounds and really liked it,” he said. He took the job and in May of 2013, sight unseen, the couple moved to the little city on Lake Champlain, with Burlington just a few miles away.

Making a Life in the North Country
When asked if he enjoys life here Jim remarked, “Laura and I love it here. The people are very Midwest friendly. When we go on vacation, our neighbors water our flowers. Our friends have become like family to us, but look at us. In our second year we bought a house and are now expecting a baby.”

Advance Manufacturing Institute
When I pressed him for closing remarks, Jim turned the conversation away from himself and toward his involvement in the Advanced Manufacturing Institute at Clinton Community College. “It is something that can set this community apart. I’m proud to have been involved in the early stages of its development. I think it will create a lot of opportunities for people. For those with initiative, desire and drive it will help them achieve their goals while also removing some of the barriers. It is critical to the future success of this region.”

As we ended the interview, I realized that I was bearing witness to the secret of Jim Kopaska’s success. He rolls up his sleeves and works hard to make an impact everywhere he goes. He leaves behind a legacy of improvement and empowerment that lasts long after he has departed.

Our community is fortunate that Jim Kopaska is living and working among us today and we will be benefiting from his involvement for years to come.